Improving Your Landscape Photography At The Fundamental Level. 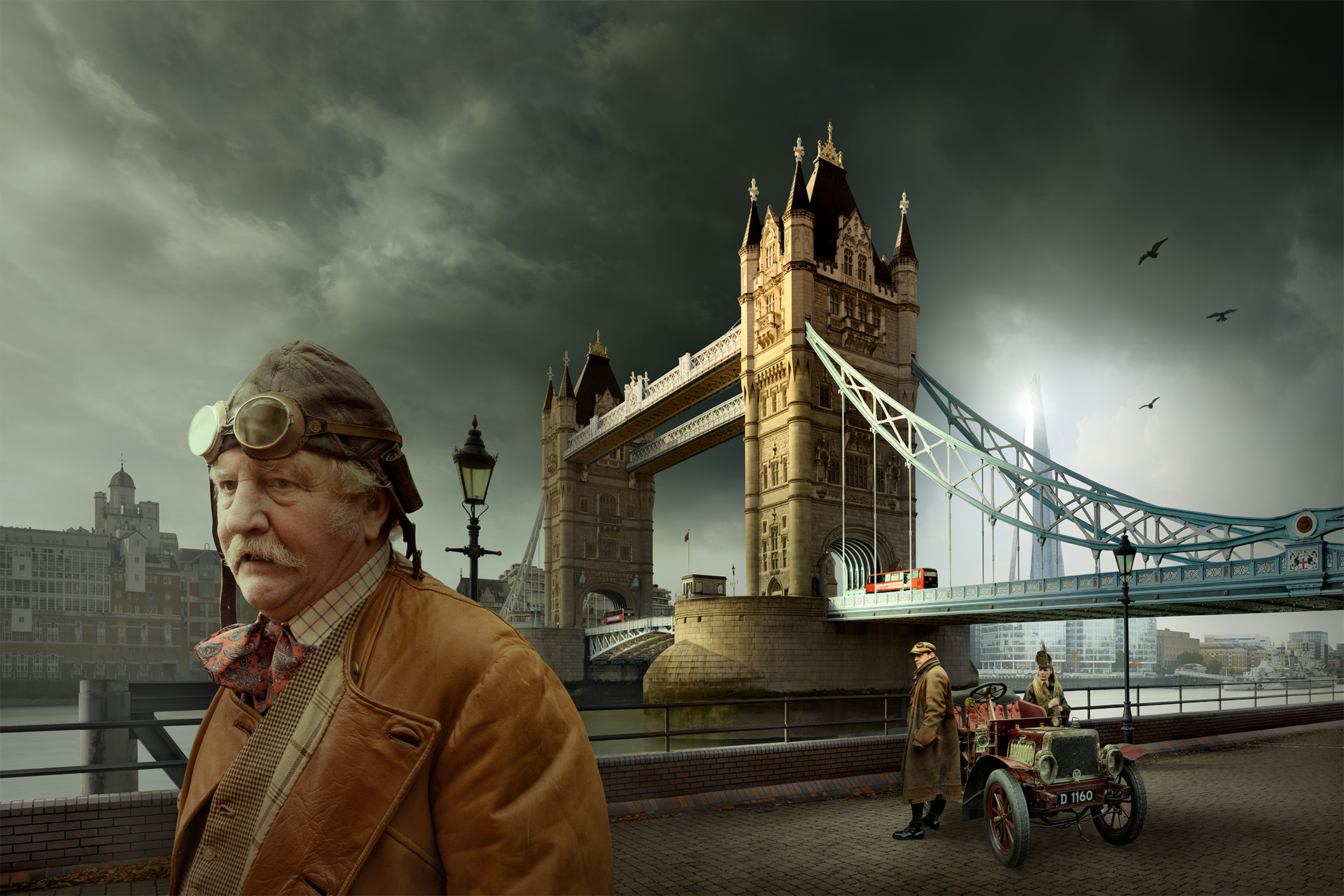 Question: – Is this a good picture? I said ‘Picture’ not ‘Photograph’ because ‘Photography’ is only relevant when talking about the medium used to create the ‘Picture.’ Normally, I wouldn’t worry about such semantic word games, but many photographers never question the obvious; what it is exactly they are doing when they press the shutter release; because pressing the shutter release is so easy to do. A photographer is a picture-maker who uses a camera. Obviously, they ‘see’ their pictures, but they concentrate too much on judging the technical quality and not enough on judging the picture quality. They are too narrowly focused on photography, that they never ask all the wider questions that would help them improve as photographers or ‘picture-makers.’ A picture is communicating an idea or emotion visually regardless of what medium is being used to create it. At its very core, it’s visual communication. Visual – Means understanding subjects like ‘The Artistic Principles,’ design, and color. Communication – Means having something to say. Everything comes together when viewers look at your picture and understand what you are saying. If they don’t understand what you are saying, it can’t be a good picture!

Question: – Is this a good picture? Or: Do you understand what I am saying, the storyline, and have I communicated it in a visually interesting way? The answer to the first part, ‘Do you understand what I am saying,’ has to be NO. – I don’t even know what the story is between Tower Bridge, a man wearing goggles and a vintage car is, because there is no logical connection. If this were a commercial job, the man with the goggles could be the director of Tower Bridge and the car some of the bridge employees, etc. That way you have a logical, cohesive, and honest portrait; the director and what he is director of; Tower Bridge. Just adding random objects only for visual effect is the wrong approach because there is no underlying logic to connect them. The result is just an image, not successful visual communication. The answer to the second part, ‘Have I communicated it in a visually interesting way,’ has to be YES. – The picture fulfills the visual criteria of any picture in any media, which include the artistic principles, cohesion, light, form, spatial depth, mood, atmosphere, a sense of a momentary event captured to name a few. In summary, the picture is a good example of photography needing two components. Have something to say and say it in a visually interesting way. Get both together and your picture is a winner. Just keep the storyline clear, simple, honest, and cohesive. 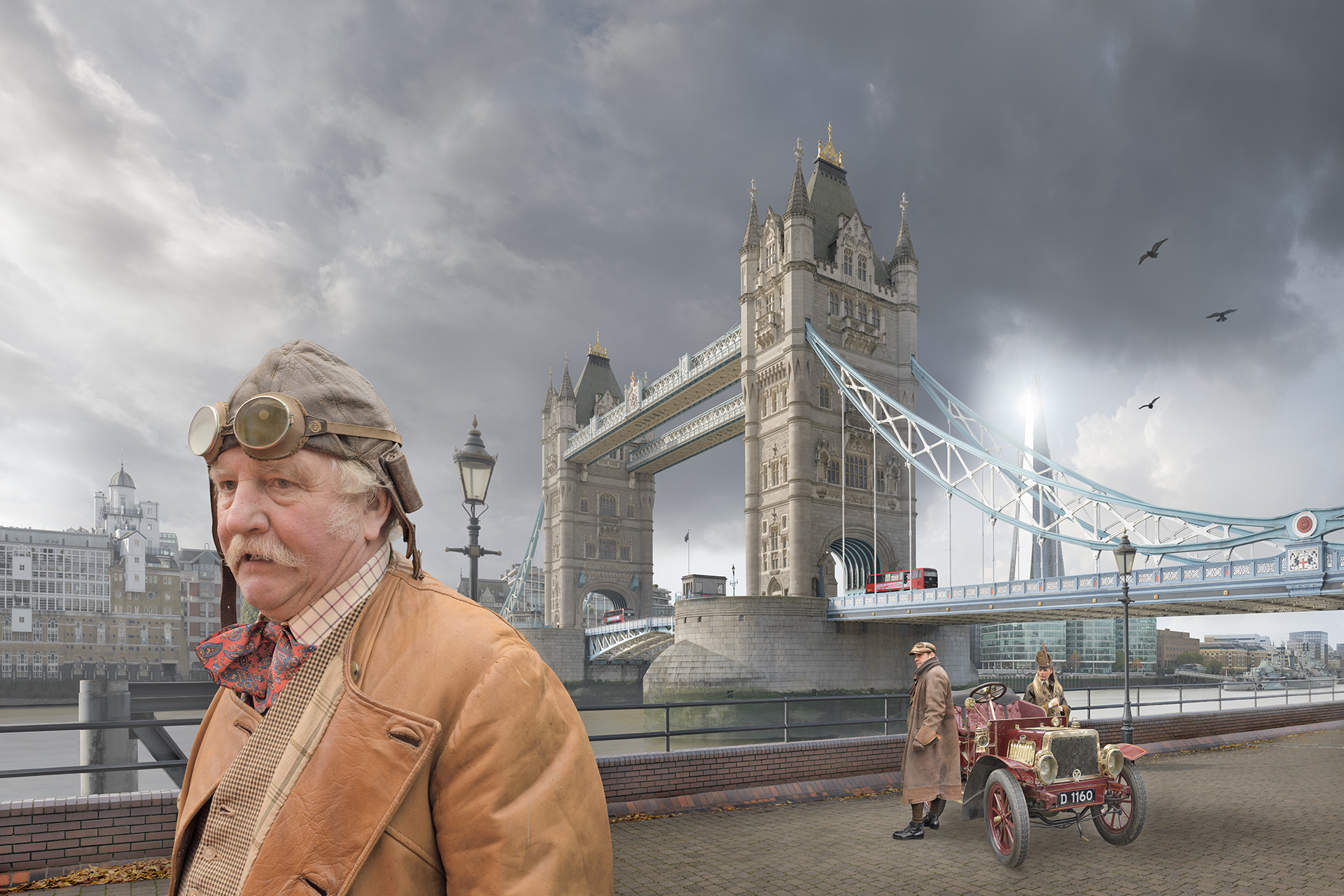 The Cleaned And Composited Image

Create Visual Order. Click on the thumbnail and make the picture full screen. Try to look at all of the picture at the same time; try not to focus on any detail. Ask yourself: What draws your eye? Answer: The sun on ‘The Shard’ then the man, everything else is third. Why? The sun is the brightest tone. The man is the dominant shape and the main difference in color. If we removed the man, everything else is so equal in tone and color, there is no hierarchy, we don’t ‘lock’ onto anything specific. The bridge is only because of its hard lines and shape. What we have now is the man as the main actor, the hero of the picture. Let’s compare this with what I want. My main hero is Tower Bridge, that’s my story, the picture is not a portrait. Emphasis – the number one artistic principle. You must emphasize the elements in the order of their importance to the story. Visual order is to give a visual hierarchy to the elements so that everything works together in cohesion to tell one clear story, with one clear hero. We create this hierarchy by varying the tonal values and color, keeping the hero brightest with the most color difference so that it stands out. 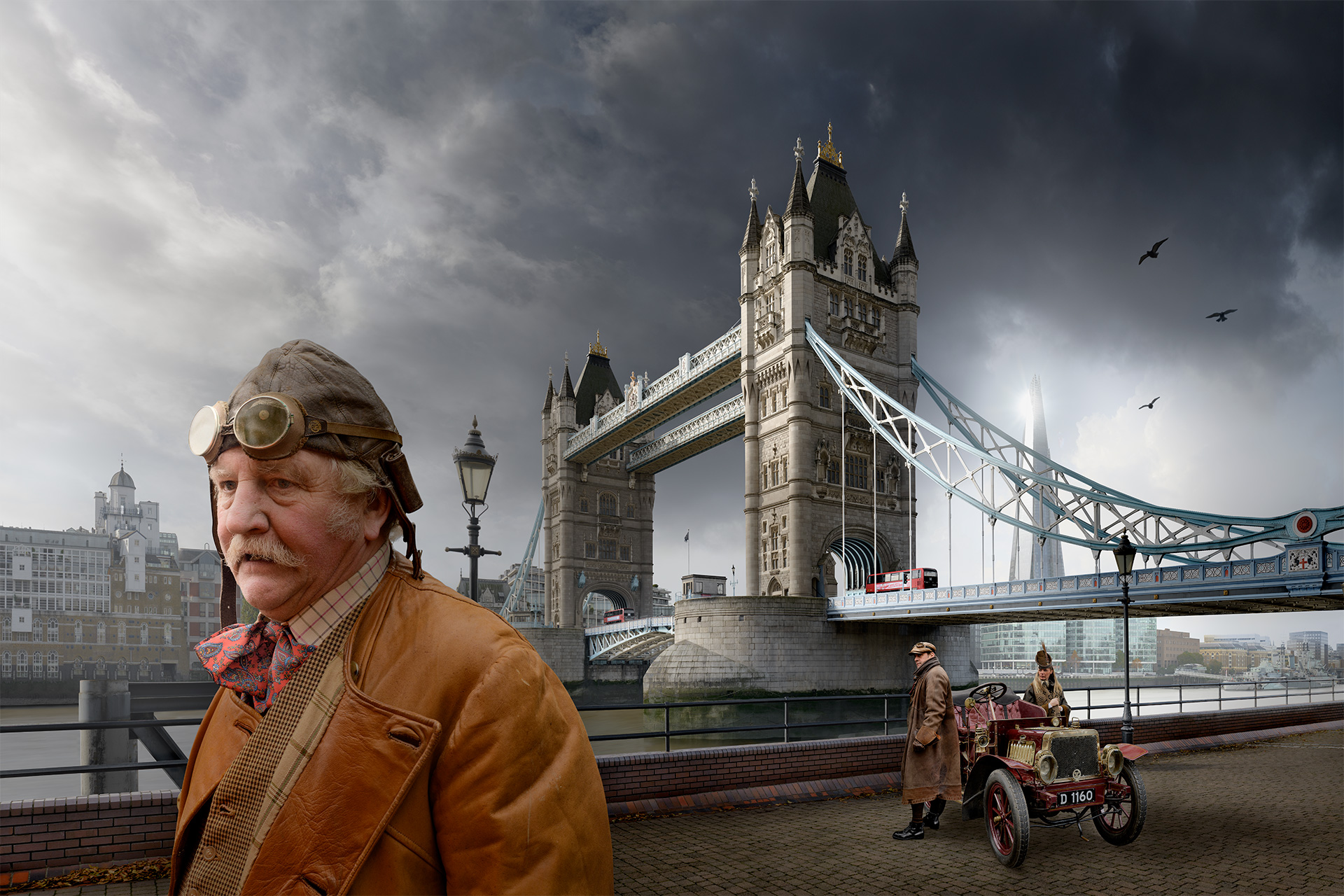 After The Tonal Changes

Create The Structure. The tones have been changed to alter all the tonal relationships in the picture on two levels. Globally, to give the elements a hierarchy, dropping down the emphasis on the man and bringing up the emphasis on the bridge to make it the hero. Tower Bridge now dominates the picture clearly as being ‘where the main action is’. There is now clear visual importance. Individual elements also have their tonal relationships altered in relation to other artistic principles. For example, Light, emphasizes the story about light in the picture. The light hitting Tower Bridge. The light hitting the side of the man’s face, the car group, and ‘The Shard.’ To make sure there is a cohesive, logical, and correct story about light. The tonal relationships have been altered to enhance the three-dimensional form of each element. The roundness of the man’s face, the planes of Tower Bridge, and again the car group. Finally, the tonal relationships have been altered to enhance spatial depth, so the buildings on the right, seen through the bridge now feel very far away and yet the man feels very close; a ‘spatial depth structure.’ 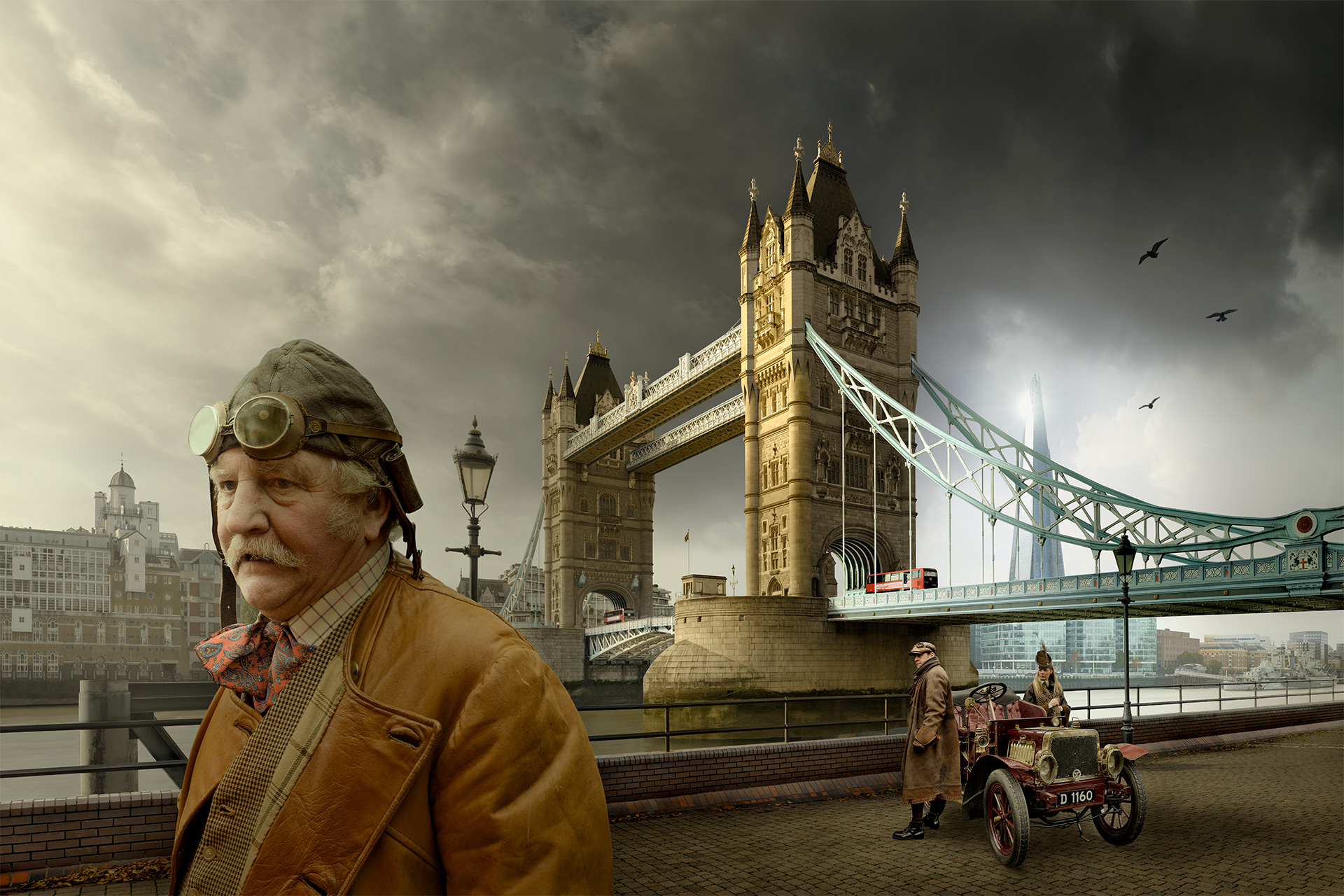 Create The Mood. Having put so much effort into capturing tonal detail everywhere in the picture at the camera, especially in the shadows, then retaining all of that detail through the post-processing to date, we ended up with a base image that I call ‘super-readability.’ This means every millimeter of the picture has subject information. We can now darken down very large, broad areas of the picture dramatically, yet still retain fine detail even in the darkest areas. In effect, we can make all the shadows very dark, but they never fill in and block up; which would make them dead and lifeless. Another artistic principle is variety, we need detail everywhere to give variety everywhere, which keeps the picture visually interesting. Detail also captivates the viewer to search and explore the picture; to invest time in the picture. The mood is also set by the color. Green giving an eerie feel, a feeling of mystery that I felt was in keeping with the man with goggles, the car group, and the general atmosphere of the picture, yet is contrasted against the bright ‘cleanliness’ of blue color around ‘The Shard’ and the warmth of the light hitting Tower Bridge. 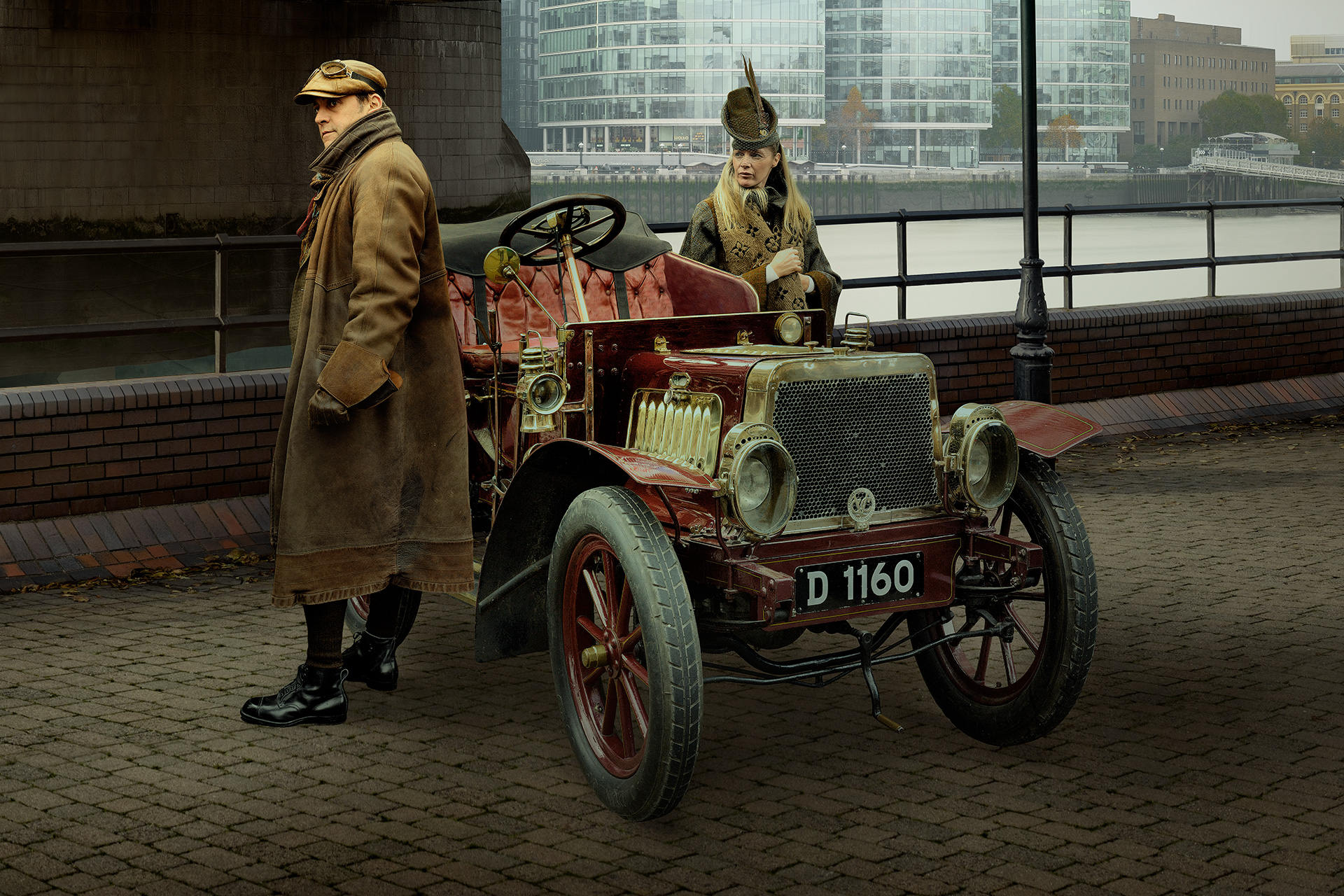 Create The Sub-Stories. It’s my belief that you should be able to ‘cut-up’ the entire photograph into a great many smaller pictures and each of those pictures should be a good picture in their own right. The interest level depends on their content, but the logic is that how can you expect to create a good overall, interesting image if all the sub-images cannot hold their own interest. You can’t create an interesting overall image if the details are boring; where would the interest come from?. Overall interest is only the accumulated result of many areas of interesting details. The car group is a perfect example of this logic. Ideally, a perfect sub-picture and ‘mini-story’ within the context of the overall picture. The group is a composite but as a group, I wanted their expressions, body language, and logic as a group to create a feeling of tension, all looking towards and concentrating on what was happening out of frame. A self-contained ‘mini-story.’ The more we can make every area of the picture work as ‘mini sub-pictures,’ the more powerful and successful the overall picture; provided we keep the overall picture cohesive with hierarchy.

This picture has been the ideal example to use because if I saw this picture on a website, I would think: ‘How the hell did he get that picture?’ It’s a perfect example of setting out with one clear idea but being open-minded to opportunities that come along and being willing to change and adapt according to what happens. What you end up with, may well not be what you set out to achieve. Combining this open frame of mind with being fluent in Photoshop and knowing the fundamental ‘Artistic Principles,’ opens up a whole new world of artistic and creative possibilities; a whole new type of picture you can create. The journey is the artistic, creative enjoyment, not just the final product. You may love this picture or you may hate this picture, but you haven’t seen a picture of Tower Bridge like this before and I did it only through time and effort, not money spent on employing models, etc. If you are willing to see compositing as an entirely acceptable creative tool, then the creative and artistic possibilities are endless. Compositing doesn’t need to be this extreme, it can be limited to merely changing the sky, but taking control of the image is the key to creating something different and not producing just another generic recording of the location. Learning and then applying ‘The Artistic Principles’ gives you creative guidelines to follow, so the end product has a correct visual foundation, and learning Photoshop skills gives you the technical skills and creative freedom not to be limited to just what the camera gives you. You can explore the creative possibilities of what you shoot. Use the camera only as a means to create data, not create the final image. I would love the opportunity to teach you these skills in-person, on a workshop.

Get Notified For The Next Story: What’s Next?

The plan is to do a black and white photograph next in the same story format, preferably a more traditional landscape image. While this picture has been a great exercise, it may also be hard for people to relate to in their own everyday photography. A good black and white landscape photography, I think would be a great subject that is both great for teaching and is also very relatable. Please share this story on your social media and sign up below so you will hear when the next story begins soon.

“I teach the complete photography workflow from concept to print.