Teaching enthusiasts every strand of creative photography. The knowledge and skills to create your own style.

Teaching enthusiasts every strand of creative photography. The knowledge and skills to create your own style.

– The Knowledge, Skills & Workflow To Be Unique.

Photography Enthusiasts Are Being Misled By Social Media Experts.

Digital photography has made photography available to all but at a cost. – It’s created an isolated photography bubble cut off from the outside world; that holds the proper knowledge enthusiasts need to learn. Those least qualified, YouTube and social media influencers dominate knowledge and teaching. Self-proclaimed experts without any real-life work experience as professional photographers. Living inside the social media bubble, they sell workshops and tutorials to enthusiasts. They deceive enthusiasts by pretending to be professionals. Most have very limited knowledge and offer basic, often bad, even wrong advice. Social media influencers have corrupted the enthusiasts’ understanding of photography and dumbed-down photography, flooding the world with generic-looking, literal and uncreative photography. Professional knowledge is now almost impossible to find. Enthusiasts only have access to those least qualified. The workshops are my lonely stand against their endless promotion of mediocrity. A beacon of hope for those who believe in quality, creativity, and personal style.

You Can Not Be Creative, If You Don’t Transform Your Photograph!

Photography is about creating pictures, not recording pictures. Looking beyond the lens, and being creative. Transforming subjects into beautiful artistic photographs full of light, mood, drama, and atmosphere. Pictures that are unique, that stop, captivate and reward the viewer. My workshops teach photography enthusiasts with a desire for improving, but need the correct knowledge to do so. My unique approach is to maximize the creative potential of digital photography and employ ‘The Artistic Principles’, used by old master painters, as creative guidelines. Practical knowledge learned from experience. 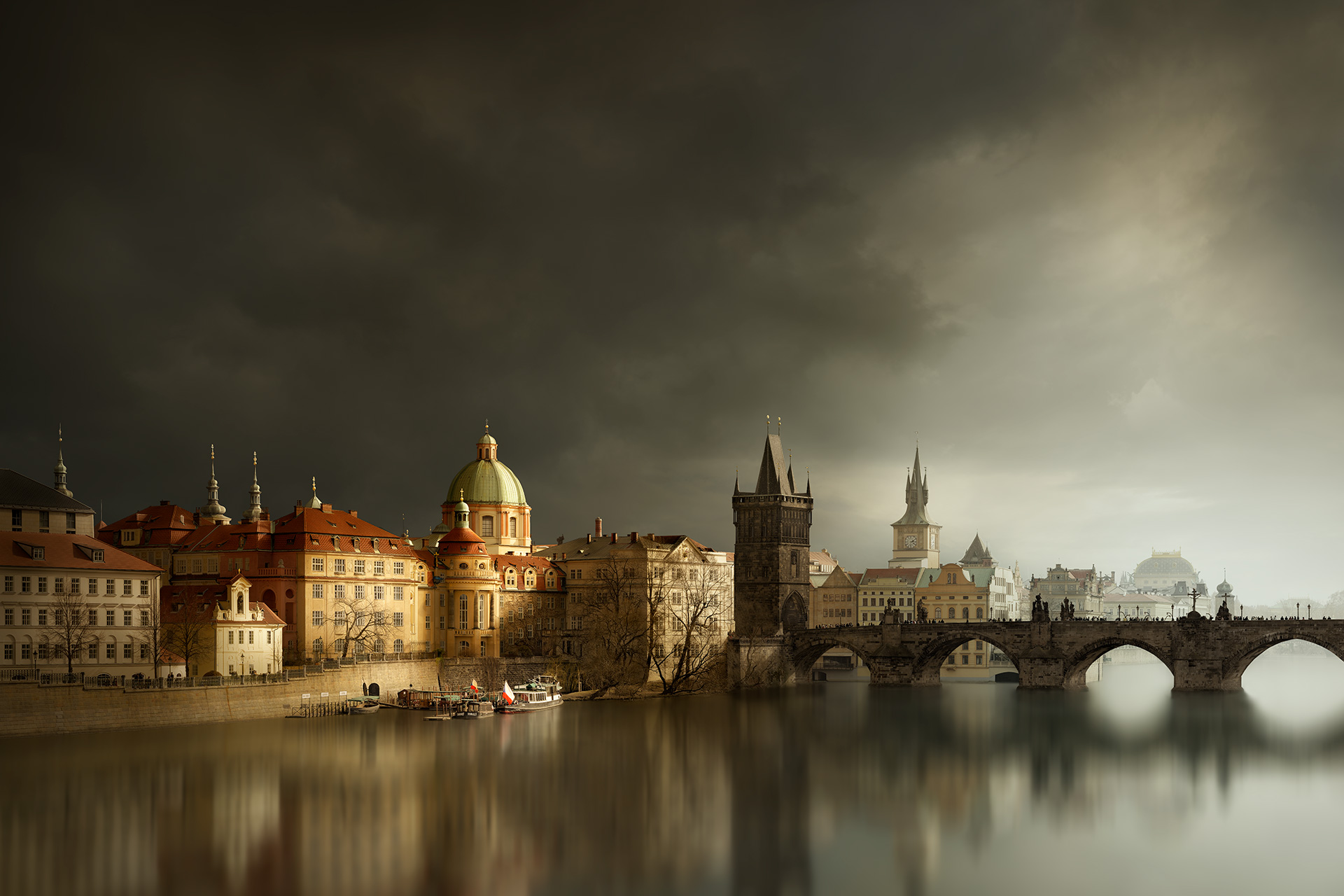 An Example: The Leaning Tower of Pisa

– How To Create A Very Unique Picture, From A Very Popular Tourist Site.

The danger of going somewhere well-known is everyone’s going to have the same image. My image of the Leaning Tower of Pisa, below, was taken during one of my workshops teaching an enthusiast a few years ago; when I first began teaching workshops. In a small way, it was a defining moment for me, even after 30 years as a professional photographer. I thought I’d been around too long for any more defining moments in my life, but now and again, they still happen!

We had photographed around Tuscany and were leaving to fly home from Pisa. As I had never seen ‘The Leaning Tower of Pisa’, I said: “Why don’t we photograph it?”. The reply was quick, short, and abrupt: “Everyone has that picture, I don’t want the same pictures as everyone else”. Oops, that went down like a lead balloon. I was a little embarrassed, maybe it was not exactly the world’s most original idea, and I was supposed to be the professional getting paid to offer great creative ideas. I guess I could see his point – but that’s when it happened, my moment of real clarity bit. If we all ruled out everything that has been photographed before, we would never take a photograph. There’s not enough left in the world to shoot. It is not the location that makes your photograph unique, it is how you transform that subject to create your own personal, artistic interpretation of the subject, that makes your photograph unique. With this approach, you have the world to photograph, and you will still create very unique photographs. The key to being unique is to artistically transform your photograph.

Anyway, we did photograph ‘The Leaning Tower of Pisa’ and I said to him, I will make it look very different from everyone else’s version. Let’s just say that when I got back to London, ‘I was very motivated to make it a good photograph’, or I was going to look like a right idiot. I think it turned out ok. The aim of my workshops is to teach you all the important principles behind making photographs, then the skills to apply the principles. How to transform literal pictures into creative pictures.

The Enthusiasts’ Greatest Weakness Is Knowledge

The Subject Is Only My Starting Point. Then I Ask – How Can I Transform It? – The Iceberg Analogy.

Above The Water – The Literal Approach To Photography.

Basic photography and retouching knowledge you can learn anywhere. The knowledge promoted by social media ‘experts’ and the internet. Record the subject with a tidy composition, then corrective retouching. Photography is primarily camera orientated. A literal mindset of making the pictures based on design. Not a creative mindset of making pictures based on interpreting your subject. Creativity requires: ‘ Not judging the scene in a literal way, but judging the creative potential of what it could become’. Literal pictures are simply the result of not knowing what more you can do to your picture.

Below The Water – The Artistic And Creative Knowledge.

The artistic and creative knowledge you CAN’T learn everywhere. My clients said, ‘ I don’t know, what I don’t know’. Understanding how viewers respond to pictures, then adding the artistic knowledge to know how to control the viewers’ response, is what clients didn’t know. All good pictures manipulate the viewer, in order to evoke an emotional response. Pictures remain literal because the subject is never seen as only raw material to create something greater. Then, not knowing the artistic principles or techniques that enable you to transform it, into something greater. The knowledge can be learned from painters, in the larger world of art. – The more artistic knowledge you have, the easier it is to see the creative potential in the subjects you shoot.

And, How Do You Create Your Own Unique Artistic Style?

It’s by transforming your picture that you create your own personal artistic style. Your own unique style emerges by applying your personal choices to every creative decision within the structured workflow. The wider creative knowledge below the surface is the key to solving your creative problems. That’s why my workshops are unique – its knowledge others don’t teach.

I Offer One Comprehensive Workshop

– You Learn: The Artistic Principles, Photography, Photoshop & My Workflow.

I offer one comprehensive photography workshop, online or in-person, having identical content and aims. Workshops are all one-to-one tuition with no preset dates, being booked on demand. Online options are all live tuition, not pre-recorded videos. Photoshop is used. You DO NOT need to be an expert, only familiar with basic Photoshop skills. The workshops are taught in a logical, simple step-by-step way, using a modular syllabus to make learning easy. – My Four Principles:

Understanding how everyone looks at pictures first, means we understand the rules for making pictures that work. We all ‘read’ pictures the same way – so learning how we ‘read’ pictures must be the primary knowledge to learn first.

Understanding how to ‘write’ in a visual language means we can create pictures that people ‘read’ correctly. If the ‘reading’ and ‘writing’ languages are not a perfect match, the picture will never communicate successfully.

03. You Must Prioritize Photoshop.

The photograph is NOT the product of the camera, it is the product of Photoshop. The camera is downgraded to only recording assets for Photoshop. Photoshop is the creative tool. It allows us to artistically transform the picture.

04. And, Use A Structured Workflow.

To maximize quality, it’s not only what you do, but in what order you do it that is also important. A workflow means a repeatable working structure that accounts for every step of the picture-making process, but with creative freedom.

The workshop is a ‘one-stop’ education in photography covering my complete workflow for creating artistic pictures. The workshop is broken down into modules, each module is then broken down into small easy-to-learn steps. This method of teaching makes it very easy to learn the complete workflow. Taught with a logical approach and with personal service.

After The Workshop: You Have Every Step Documented In Workshop Notes And Photoshop Files.

When you complete the workshop, you will understand what makes a good picture and how to construct that picture in your own personal artistic style, and all the camera and Photoshop skills to do so. You also have a workflow to follow for all your future photography. Fully documented with workshop notes, personal notes, layered Photoshop files, also in the case of online workshops, the live video recordings of every session. I am also freely available for follow-up advice and to critique your images after the workshop, so your progress never slows down. I want you to succeed, it’s satisfying.

And, You Can Start Learning Now For Free. – Just Read My Tutorial: ‘What You Learn’

You Learn: The Artistic Principles, Digital Photography, Photoshop Retouching, AND my Workflow. All in one comprehensive photography workshop.
All fully documented with workshop notes and images.

An Easy To Learn Modular Syllabus

– The Complete Workflow Broken Down Into 9 Logical Steps.

Can I Really Learn It? Yes …

Learning is easy if made simple. A logical approach makes learning simple.
I break the subject down into small steps. Teach you one step at a time, then add the steps together. Learning is fast, easy, efficient, and painless.
You learn more in less time and at your own pace.

Personal One To One Tuition

Online – Learn from the comfort of your home. 27 hours of live, one to one, personal tuition using the free Zoom video software. Every session is video recorded live. 9 sessions, each 3-hours long. The suggested plan is for 3 sessions per week for 3 weeks in total. This keeps the momentum going, but does not overload you. The complete workshop is recorded live, not pre-recorded, as documentation for after the workshop. Comprehensive notes are supplied before the workshop.

In-person – Learn while on location worldwide. 3 choices. Your home overseas, 11 days. Travel with you overseas, 11 days. Workshops held in Great Britain, 8 days. The workshops held outside Great Britain include 3 free ‘Photography Days’ worth £1,000. These are days reserved for shooting portfolio-quality photography only. Read more about this on my FAQ page for more information. Comprehensive notes are supplied before the workshop. This option involves practical photography.

Your style, NOT mine. I teach you a structured workflow, NOT a preset style.

How To Book Your Workshop

I Am More Than Happy To Have A Personal Zoom Call With You,
Before You Commit – To Talk Over Any Concerns.

Send Me An Email. Answer 3 Questions:

What Country Do You Live?

We then continue the conversation and finalize the details.
Please read The Terms & Conditions and General Information on my FAQ page.